Our second Sea Lion of the Month for May is another sea lion from Russia. M896 was born on Medny Island and marked on July 8, 2008 so he is almost 9 years old. He weighed almost 80 pounds (36.2 kg) and was over 3.5 feet (111 cm) long—a big pup! He has a fungal patch over the ‘M’ which can make the letter hard to read however, this does add a unique feature making it easier for us to distinguish him in hard-to-read images. In many cases, natural markings like fungal patches and scars are helpful to confirm sightings. 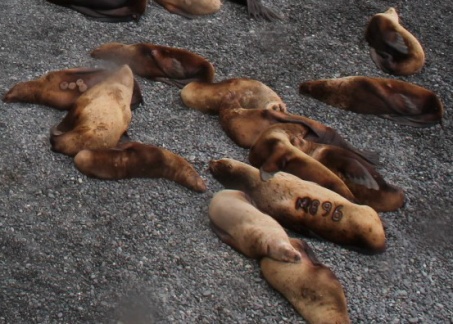 M896 is about seven years old in the image above, captured in 2015. At this age, he is likely sexually mature, or reproductive however, he is not quite large enough to compete with larger males for breeding territories.

This fella stayed pretty close to home, Medny Island, during his younger years. The last time he was seen on Medny was in the summer of 2014. He was then seen almost 900 miles away on St. George Island (part of the Pribilof Islands in the eastern Bering Sea, Alaska) on March 19, 2015. That’s a long ways away! Many of you have reported seeing him on Cape Wrangell on Attu Island on images taken during the summer of 2015. He had a bit of a ‘walk-about’ and ended up returning to Medny Island during the summer of 2016. I wonder if he’s getting ready to start putting up a fight for a breeding territory or if we’ll see him again back on Cape Wrangell again soon?

We will share the stories of two marked sea lions each month. Be sure to check-in on the 1st and 15th of every month to learn about our featured Steller sear lion. You may nominate a sea lion by submitting their full mark on the Sea Lion of the Month forum. Thank you all for your nominations!