And we have so much to share with you!

The Steller sea lion field season is over and everyone has returned to the office, hard at work processing and analyzing data, and writing up reports. If you’d like to read all about our different trips and scientific goals for each trip, check out our previous Steller Watch blog.

I was fortunate to participate on the research cruise and the re-sight trip. Despite some challenging weather, we were very successful and productive! We also saw a lot of amazing things along the way. Though I had a great time during my four weeks away, I have to admit I’m pretty excited that I won’t have to share tight living quarters with several other people until next year!

Be sure to “Follow” our blog to see more posts over the coming weeks from biologists, field campers and volunteers who participated in this summer’s Steller sea lion field season. And, great news: you can now use the new Zooniverse app to classify images.

During the research cruise on the M/V Tiĝlâx, two big goals we had were to look for previously marked animals (like those you all are looking for on Steller Watch) and to visit a select group of sites to count sea lions. These sites were missed during last year’s Aleutian Islands abundance survey. This means, I was able to fly six sites with our new co-pilot!

We also visited three sites and marked almost 300 pups for our long-term life history study: Gillon Point (Agattu Island, “~” symbol), Hasgox Point (Ulak Island, “>” symbol), and Ugamak Island (“A” letter). Handling and working with these large sea lion pups (weighing 70-110 lbs) is a lot of work but an amazing experience. In the first image (below, left picture) you can see a pup that fell asleep while hanging in the net during weighing!

A pup that fell asleep in the net while being weighed 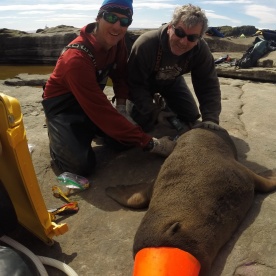 A pup hanging out in the recovery area.

After weighing, the two pup handlers (middle picture) carefully move the pup to the veterinarian’s station where she applied gas anesthesia until the pup fell asleep. During this time, we collect samples and apply the mark (you can read more about this process here). These pups were then released to the recovery area where we kept a watchful eye to insure they were fully awake and mobile. In the right picture, you can see small square patch of fur has been shaved off. This fur sample is used to measure contaminants, such as mercury. 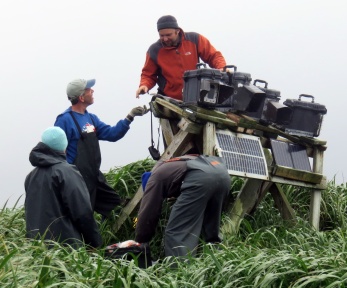 Maintenance of and downloading images from our remote cameras were other important goals during the cruise: we collected 245,972 images from 17 of the 20 sea lion remote cameras. For the last two years we haven’t been able to access two of the cameras at Cape Wrangell (Attu Island) due to large waves at the landing site. If the cameras are still working well, they should still be snapping away and capturing images. The third camera was on Cape Sabak (Agattu Island). We were able to get to it but there were no images captured due to some technical difficulties. We did end up putting a new camera on Cape St. Stephens (Kiska Island) for a total of 21 cameras!

During one of our visits to Hasgox Point we had some unexpected visitors that delayed our work for a day. Two killer whales showed up at the rookery and were swimming around for hours! While we didn’t see any direct sea lion kills, we knew these were transient, or Bigg’s killer whales (“mammal eaters”). It seemed as though they were almost practicing hunting maneuvers. The most interesting thing to see was how the sub-adult and adult males reacted; these males would jump right in the water and swim around, very close to the killer whales! If you’d like to learn more about killer whales in the Aleutian Islands, we have a post coming up from one of our volunteers from the cruise in a couple weeks—be sure to “Follow” our blog so you don’t miss a thing!

On our way east, we were fortunate that Bogoslof Island, a volcanic island which has been erupting since December 2016, calmed down enough for us to check out (at a safe distance). The island has changed a lot since the last time we visited in 2015. It is much larger and even higher in elevation than before. Interestingly, despite the volcano continuing to erupt, there were thousands of sea birds and hundreds of northern fur seals and Steller sea lions on shore! Looks pretty warm and steamy.

Be sure to “Follow” our blog to see more posts over the coming weeks from biologists, field campers and volunteers who participated in this summer’s Steller sea lion field season. And, great news: you can now use the new Zooniverse app to classify images (Download for Apple or Android)! We have added more images to our Steller Watch project. Please join us and help figure out why the Steller sea lion continues to decline in the Aleutian Islands.

I have been a biologist in NOAA Fisheries Alaska Fisheries Science Center studying Steller sea lion population abundance and life history for over 10 years. I am an FAA certified remote pilot and have been flying marine mammal surveys with our hexacopter since 2014. I earned my B.S. in Aquatic and Fishery Sciences at the University of Washington and my Master in Coastal Environmental Management at Duke University.