The Sea Lion of the Month for December was nominated by a dedicated Steller Watch Citizen Scientist: ~92! This sea lion is a male that was born on Gillon Point on Agattu Island (this island is assigned the ~ symbol). When we captured him June 24, 2013 to he weighed just over 60 Ibs (27.4 kg) and was over 3.5 ft long (111 cm) and almost 3 ft (83 cm) around his torso (measured just below the front flippers). not the heaviest pup we have seen but quite long!

This sea lion has been seen on only two islands both in remote cameras and during our research cruise in 2014 and 2015. We also saw ~92 just this past summer (2017) in our our hexacopter drone images in 2017 (see the featured blog image above). He mostly hung out at Gillon Point from when he was born to when he was about a year old, finally moving on to Cape Sabak (still Agattu Island) in the spring of 2014. Since then it seems he’s mostly stuck around! I wonder where he will end up once he’s old enough to compete for a breeding territory? Based on typical behavior of male sea lions, I would suspect back at Gillon Point! 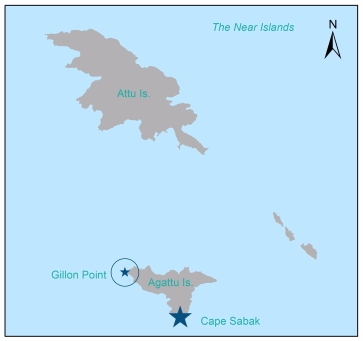 Curious about other pinnipeds (seals and sea lions)? Check out our neighbors in the Pacific Islands to the south, the monk seals of the Northwest Hawaiian Islands. The Pacific Island Fisheries Science Center features their own Monk Seal of the Month!